During the Vietnam War, Red Cross workers provided services to U.S. military personnel and assisted Vietnamese refugees (1962-1974).  In 1962, the American Red Cross sent its first paid field staff to Vietnam to assist the growing number of servicemen at various bases and hospitals.  At the height of its involvement in 1968, 480 field directors, hospital personnel, and recreation assistants served throughout Southeast Asia.  Red Cross workers, who provided 1.9 million services to U.S. military personnel, shared the hardships and privations of war with the soldiers.  Five Red Cross staff members gave their lives, and many others were injured as they helped servicemen resolve personal problems or get home when emergency leave was granted due to death or serious illness in their immediate family.

Bound by its charter to provide welfare services to the able-bodied troops on duty, the American Red Cross engaged in efforts to sustain the morale of the troops in Vietnam, just as it had during the Korean War and previous conflicts.  In response to a request by the military, the Red Cross sent teams of young female college graduates to Southeast Asia to conduct audience-participation recreation programs for men stationed in isolated sections of the region.

A monthly average of 280,500 servicemen took part in recreation programs at 20 major military commands.  Officials estimate that the clubmobile workers, who traveled by jeep, truck, and helicopter, logged over 2,125,000 miles during the program’s 7-year history.  Trained Red Cross personnel also engaged in therapeutic recreation, which was geared to patients’ individual rehabilitation needs.

In 1976, despite protests from commanding officers, the recreation program was drastically reduced in a cost-reduction action that removed professional recreation personnel from military hospitals.

There were three categories of Red Cross Workers in Viet Nam:

These women and men worked in the hospitals directly with the patients, doing a combination of social work and recreation therapy.

These women and men were the Red Cross social workers who arranged compassionate emergency leaves and received and passed on communications from the families back home regarding births, deaths, and emergencies.

These women were the Donut Dollies.  Their job was to provide “a touch of home in a combat zone.”  They brought games and kool-aid and a respite from thinking about the war to men in the field.

“When someone asks me what I did in Nam, my usual response is: ‘I flew around in helicopters and played games with the guys.’ ”

“Red Cross Recreation Workers, a.k.a., Donut Dollies, played games. It was our mission, our job, what we were sent to Vietnam to do. We played games in mess halls, on flight lines, in recreation centers, on LZ’s, firebases, along the road–wherever there were GIs.”

“The question asked most often of us was, “Why are you here?” My usual reply was, “Because you are.” No matter how tired we might get, there was always another smile and a wave for the guys.”

“In Dong Tam, mortar attacks occurred more nights than not. I learned quickly to distinguish incoming from outgoing, to listen for the 3 marker rounds (even in my sleep), and to immediately determine if the rounds were walking toward me or away. I could decide in a few seconds if the attack required my going to the bunker. Whether or not a mortar attack was memorable was determined by it’s proximity to each person’s location.” 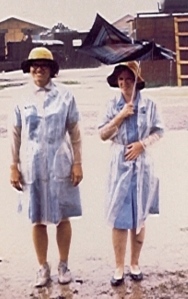 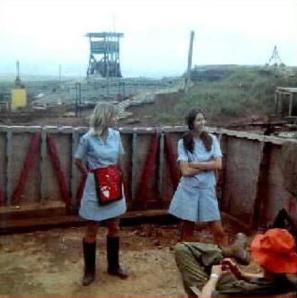 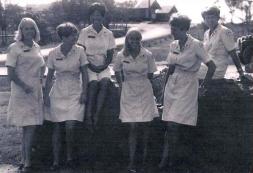 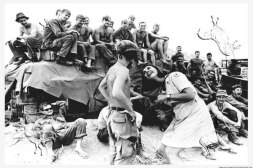 Our own Ann Konermann, back row 2nd from right