Who could ever forget about C-Rations?  Well, my friends, let me refresh your memory and tell you everything you need to know but have forgotten about those wonderful meals.

“The Meal, Combat, Individual, is designed for issue as the tactical situation dictates, either in individual units as a meal or in multiples of three as a complete ration.  Its characteristics emphasize utility, flexibility of use, and more variety of food components that were included in the Ration, Combat, Individual (C-Ration) which it replaces.  Twelve different menus are included in the specification.

Each menu contains: one canned meat item; one canned fruit, bread or dessert item; one B unit; an accessory packet containing cigarettes, matches, chewing gum, toilet paper, coffee, cream, sugar, and salt; and a spoon.  Four can openers are provided in each case of 12 meals.  Although the meat item can be eaten cold, it is more palatable when heated.

OK, now that your memory is refreshed, do you remember how you cooked your C-Rations.  Well, with a STOVE you made, right?  It was reported in the media that each soldier in Vietnam had a hot meal each day.  If I remember correctly, we used heating tablets in our stove to heat a can of whatever (no ham and lima beans for me) – well I guess that qualifies as a hot meal.  Do you remember your special recipes?  Those wonderful recipes that you made up so the C’s were more palatable.

My favorite recipe was to get a can of bread from the B-3 unit and a can of cheese from a B-2 unit; open both cans but do not take off the lid; place both cans in an empty B Unit box; light the box on fire until it burns completely; remove the bread and open it; pour the melted cheese over the bread and voila a toasted cheese sandwich.  Ahh, comfort food in the middle of the jungle.

But wait there is more…

In 1966 during the Vietnam war Brig. Gen. Walter S. McIlhenny son of the 2nd company president of McIlhenny Company from his experiences with C-Rations as a soldier during WWII came up with the idea to send soldiers copies of the Charlie Ration Cookbook filled with recipes for spicing up C-rations with Tabasco Pepper Sauce wrapped around two-ounce bottles of Tabasco Pepper Sauce along with a handful of a P-38 type can openers all in a waterproof canister. It was illustrated by Fred Rhoads.

How about viewing a real C-Ration cookbook. 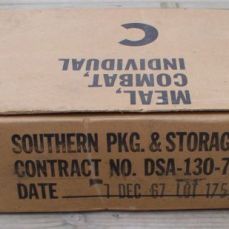 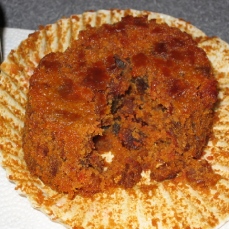