The Reunification Palace in Saigon, Vietnam

Known as Independence Palace before the fall of Saigon to communists, the Reunification Palace was home and command center of General Nguyen Van Thieu – head of a military junta who came to power after the first President of South Vietnam was assassinated in 1963. 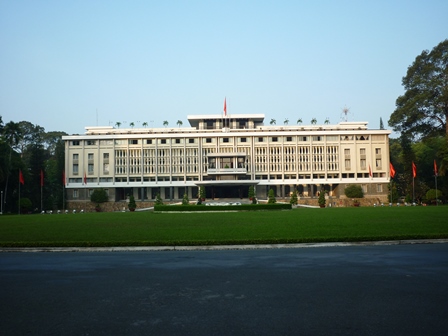 Open Hours: Daily from 7:30 a.m. to 4 p.m. The ticket window closes daily between 11 a.m. and 1 p.m. The palace closes sporadically for special events and visits from VIPs.
Entrance Fee: 75 cents.

There are very few signboards or explanations of rooms and displays – an English-speaking guide will greatly enhance your visit. Free tour guides can be arranged in the lobby or you may join a group already in progress.

Attractions inside of the airy palace interior are pretty sparse. Roped-off rooms such as the presidential office, receiving room, and bedroom appear musky and grim with antique furniture and bare walls. A highlight of the Reunification Palace is found in the basement which includes a command bunker with old radio equipment and strategy maps on the walls. After exiting the basement into the courtyard, there is a room filled with historic photos – heavily sprinkled with propaganda – portraying the fall of the Independence Palace.

A climb to the fourth floor rooftop yields some nice views of the palace grounds as well as an old US UH-1 helicopter. The rooftop was used as a helipad for evacuating staff just before the palace was overrun.

Before exiting the gate, check out two of the original Russian T-54 tanks – used in the capture of the palace – parked on the lawn.

History of the Reunification Palace

Norodom Palace – the French colonial headquarters in Saigon – was built in 1873 and occupied by the first president of South Vietnam until two rogue pilots dropped bombs on the structure during an assassination attempt in 1962. One bomb actually fell into the wing where President Diem was reading, but failed to detonate! President Diem ordered the damaged palace to be demolished and enlisted the help of renowned architect Ngo Viet Thu to build what is now the Reunification Palace.

President Diem was assassinated in 1963 before construction of the new palace was completed. General Nguyen Van Thieu – head of a military junta – moved into the completed palace in 1967 to serve as the second president of South Vietnam; he changed the name to Independence Palace.

Independence Palace served as central command for the South Vietnamese effort against communist forces until April 21, 1975 when General Thieu was evacuated as part of Operation Frequent Wind – the largest helicopter evacuation in history.