In the early-1960s, the Air Force Systems Command began experimenting with fixed-wing, side-firing weapons systems for possible use in Vietnam. By 1964, the first gunship conversion of a World War II Douglas C-47 Skytrain transport was completed under the Project Gunship I program. Initially designated FC-47D (Fighter-Cargo), it was later changed to AC-47D (Attack-Cargo).

On 15 December 1964, the AC-47D, using the call sign “Spooky”, was introduced into combat in Southeast Asia. It was an instant success in breaking up enemy attacks on hamlets and other defensive positions, and within a year, substantial numbers of the rehabilitated “Gooney Birds” were in action throughout the region.

Following the highly successful Project Gunship I combat test program, the U.S. Air Force created the 4th Air Commando Squadron (ACS) in August 1965 as the first operational unit equipped with “Spooky” gunships. Although the 4th ACS was based at Tan Son Nhut AB, it deployed from several forward operating locations throughout South Vietnam (Bien Hoa, Pleiku, Na Trang, Da Nang and Can Tho). In November 1965, the 4th ACS (tailcode EN) was assigned 16 operational aircraft with four more assigned as “advanced attrition” aircraft. Within two years, the 4th ACS and the newly formed 3rd ACS (tailcode EL) were serving under the 14th Air Commando Wing (ACW). In August 1968, the unit designations were changed from “Air Commando” to “Special Operations” (SOS/SOW).

A total of fifty-three C-47Ds were converted for use as gunships during the Vietnam War. Although the AC-47D “Spooky”, commonly referred to as “Puff” (as in “Puff the Magic Dragon”), was an effective attack system, it was also vulnerable to enemy fire. Fifteen aircraft were lost between December 1965 and September 1969.

The AC-47D was equipped with three 7.62mm SUU-11A Gatling Miniguns mounted in the fifth and sixth windows on the port side of the fuselage and in the aft passenger/cargo door area. Approximately 16,500 rounds of ammunition was carried on a typical mission. Note: The SUU-11As were later replaced by specially designed 7.62mm General Electric MXU-470/A Gatling Miniguns.

For night missions, the aircraft carried approximately 48 MK-24 Mod 3 flares. Each flare could last up to three minutes and produce a light magnitude of two million candlepower. The delivery system was extremely simple, the loadmaster armed and dropped each flare out the cargo door when the pilot signaled by flashing a cargo compartment light. Note: Initially, 30 MK-6 flares of 750,000 candlepower were carried before the MK-24 flares were available.

Airspeed during attack maneuvers was normally 120 knots indicated air speed (KIAS). With the Miniguns firing at a rate of 6,000 rounds per minute, aerial coverage was provided over an elliptical area approximately 52 yards in diameter, placing a projectile within every 2.4 yards during a three-second burst.

A modified adaption of the Douglas C-47 Cargo plane by fitting it with 7.62 mm mini guns that could fire up to 6,000 rounds per minute. The convenience of cargo space allowed for the gunship to carry 54,000 rounds.

While other aircraft would eventually succeed the C-47, such as the C-119 and C-130 with their larger capacity and features, the C-47 pioneered the development of gunships with the first AC-47 during the Vietnam war. It’s Call Sign was “Spooky”.

The AC-47 was capable of putting a highly explosive bullet into every square yard of a football field size target in 3 seconds, and it could do this intermittently while loitering over its same target for hours as long as it had the ammo on board.

It didn’t take long for it to earn the nickname “Puff, the Magic Dragon”, or “Dragonship”. Impressive from a distance, it appeared to roar as never-ending blazes of bright red tracer rounds from its mini guns shot to the ground against a dark background of night.

In early February of 1965, one Spooky fired 20,500 rounds into a Vietcong position while flying over the Bong Son area, killing some 300 Vietcong troops during a four-hour period.

From the ground at night, the sight resembled that of a fire-breathing dragon, to which the enemy began to refer to as “dragonship”,  and our US troops affectionately nicknamed “Puff the Magic Dragon” or just “Puff”.

Through the years, the military has updated, modified, recreated, and devloped more efficient Gunships.  Modern technology will continue to change, replacing yesterday’s “outdated” machines, but in my mind, “Puff” will never be forgotten and no other gunship will have the pulse racing, fear inducing, state of mind to an enemy that it did, nor the chest swelling pride from people like me.

Spooky saved our butts several times.  It was a fantastic spectacle with its cone of light.  It looked like a stairway.  When we were really in a sh**storm it was comforting to see Spooky in the sky above.

Below are two great videos of “Spooky”

Now, here are some pictures 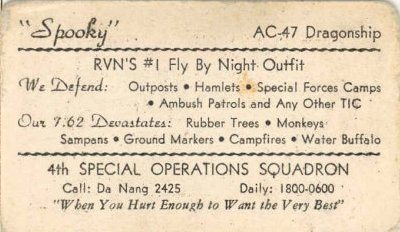