Skip to content
HomeOpposition to the Vietnam War Part IV

As the Vietnam War continued to escalate, public disenchantment grew and a variety of different groups were formed or became involved in the movement. 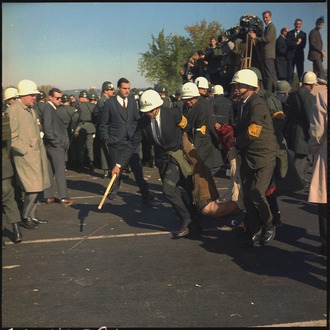 There was a great deal of civic unrest on college campuses throughout the 1960s as students became increasingly involved in African-American civil rights, women’s liberation, and anti-Vietnam War movements. Doug McAdam explains the success of the mass mobilization of volunteers for Freedom Summer in terms of “Biographical Availability”, where individuals must have a certain degree of social, economic, and psychological freedom to be able to participate in large scale social movements. This explanation can also be applied to the Anti-War Movement because it occurred around the same time and the same biographical factors applied to the college-aged anti-war protesters. David Meyers (2007) also explains how the concept of personal efficacy affects mass movement mobilization. For example, consider that American wealth increased drastically after World War II. At this time, America was a superpower and enjoyed great affluence after thirty years of depression, war, and sacrifice. Benjamin T. Harrison argues that the post World War II affluence set the stage for the protest generation in the 1960s. His central thesis is that the World Wars and Great Depression spawned a ‘beat generation’ refusing to conform to mainstream American values which lead to the emergence of the Hippies and the counterculture. The Anti-war movement became part of a larger protest movement against the traditional American Values and attitudes. Meyers (2007) builds off this claim in his argument that the “relatively privileged enjoy the education and affirmation that afford them the belief that they might make a difference.” As a result of the present factors in terms of affluence, biographical availability and increasing political atmosphere across the county, political activity increased drastically on college campuses.

College enrollment reached 9 million by the end of the 1960s. Colleges and universities in America had more students than ever before, and these institutions often tried to restrict student behavior to maintain order on the campuses. To combat this, many college students became active in causes that promoted free speech, student input in the curriculum, and an end to archaic social restrictions. Students joined the antiwar movement because they did not want to fight in a foreign civil war that they believed did not concern them or because they were morally opposed to all war. Others disliked the war because it diverted funds and attention away from problems in the U.S. Intellectual growth and gaining a liberal perspective at college caused many students to become active in the antiwar movement. Another attractive feature of the opposition movement was the fact that it was a popular social event. As one student said, antiwar demonstrations were the places to “get laid, get high, and listen to some great rock.”

Most student antiwar organizations were locally or campus-based because they were easier to organize and participate in than national groups. Common antiwar demonstrations for college students featured attempts to sever ties between the war machine and universities through burning draft cards, protesting universities furnishing grades to draft boards, and protesting military and Dow Chemical job fairs on campus. From 1969 to 1970, student protestors attacked 197 ROTC buildings on college campuses. Protests grew after the Kent State shootings, radicalizing more and more students. Although the media often portrayed the student antiwar movement as aggressive and widespread, only 10% of the 2500 colleges in the United States had violent protests throughout the Vietnam War years. By the early 1970s, most student protest movements died down due to President Nixon’s de-escalation of the war, the economic downturn, and disillusionment with the powerlessness of the antiwar movement.